The MCC versus Champion County game

The  2013 English domestic cricket season is almost on us and the MCC versus Champion County game, the traditional season opener is about to be played.

The fixture was played at Lord's until 2010 and then it was moved to Abu Dhabi. Understandably so, in early April a day at Lord's can be anything from glorious sunshine with a good crowd to mind and finger numbing cold. On a cold day there are few spectators and the members end up huddling in the Long Room hoping that the radiators have been turned on.

In a way, it doesn't matter that it's cold, or wet, or even that you've just lost the feeling in your fingers, because there's live cricket to be seen for the first time in 7 months. One year I went up to Lord's just to be there even though there was no chance of seeing any cricket, it just seemed to be special to have been there at the start of the season.

The result doesn't usually matter either, nothing is resting on the game in terms of trophies or shiny stuff and that's just as well, as I think most games end as a draw. But it is a chance to look at players with international aspirations and to see some of the best of the university players. Of the games I've seen, the 2007 game stands out for the outstanding selection that made up the MCC team, including the current England captain. Other games have included other England captains and players but are more memorable for the coldness and dampness than for the quality of the cricket. But that's hardly surprising

The 2006 fixture with Notts was exactly the sort of long johns and overcoat day that makes watching cricket hard work and discourages all but the hardiest and most stoic of spectators. 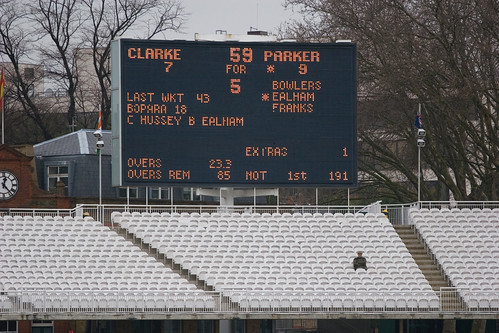 In the first innings Notts worked their way to 191 and the MCC found batting even harder. The spectator in the Compton Stand was one of only a handful of people outside the pavilion and I noticed that at lunch he didn't move. So I wandered round to the back of the stand and managed to get  a shot of the almost entirely empty ground. 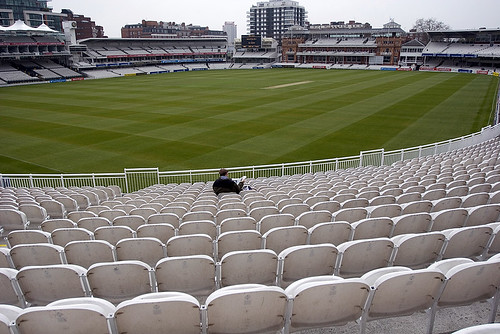 The 2007 game was exactly the sort of weather that cricket needed; warm and pleasant. The MCC selectors had worked hard on the team selection and came up with an excellent side; Alastair Cook (captain), Tim Bresnan, Nick Compton, Steven Davies, Alex Gidman, Steve Harmison, Matthew Hoggard, Alex Loudon, Graham Onions, Adil Rashid, Owais Shah, Zoheb Sharif (he later played for the MCC against the West Indians in June 2007 as his last first class game). With the exception of Zoheb Sharif and Alex Gidman, who played for England A, all of the team have played for England.

Nick Compton was the first wicket down caught by Raynor off Kirtley, however Cook put together a wonderful innings of 142.

The MCC went on to score a creditable 452 and Sussex made 385 with Onions and Harmison each taking 3 wickets. The game later played out to a draw, but was an excellent start to the season.

I think the first day of the 2008 MCC game was rained off. My friends told me that the rooftop terrace was opened on that day and that the champagne flowed freely. MCC champagne is rather good, so it's a shame I didn't go.

The last MCC versus Champion County game played at Lord's was against Durham in 2009. I went for the first day and saw some cricket, starting after lunch, but bad light and rain ended the day around the tea interval.

The first ball of the season was to Di Venuto, but I can't remember the bowler. 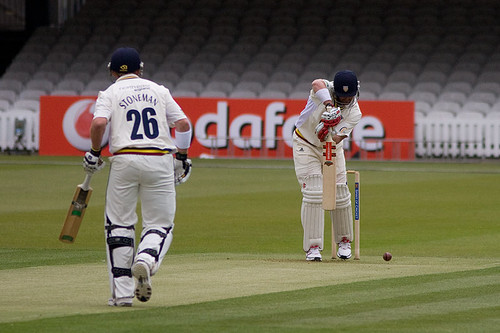 Two England notabes were in the MCC side; Vaughan and Key, and between them they made 17 runs in the first innings. 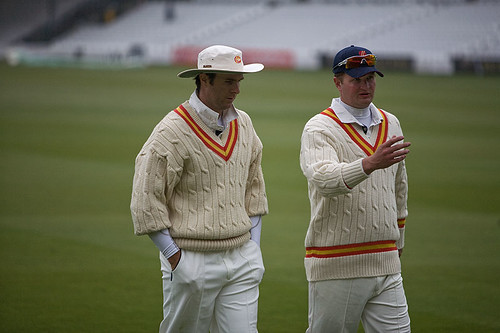 After two sessions were lost on the first day and no play was possible on the third day, the game ended in another draw.

Durham went on to win the 2009 championship and played the MCC in Abu Dhabi at the start of the 2010 season. In 2011 the champions were Lancashire. I listened to the online commentary for part of the game, there was no crowd noise and the only sound was of birds flying over the ground. I asked some of the Lancashire players what it was like when I saw them at the Parks. It seems I had a fairly good grasp on it; a big empty ground with big noisy birds flying overhead.  But the weather in Abu Dhabi is a little more warm, predictable and friendly than NW8, except perhaps during the sand storms. But it's not Lord's.

I've been watching live cricket since 1981, after moving to the south east from the cricketing desert of Stoke-upon-Trent. As I've aged and the number and frequency of injuries has increased, I've given up playing and concentrated on umpiring and watching the game. Wherever and whenever possible, I'll watch through a long lens. I'm a very keen but not terribly accomplished cricket photographer.

Note: Peter is not media accredited at Lord's and his photos are not available for licence.