April at the Parks

With the move of the MCC vs Champion county game from Lord's to Abu Dhabi, those of us that want to watch some early season cricket and lose the feeling in our fingers and toes have had to go elsewhere. I could watch Middlesex or the Middlesex 2nds play at Slough, or perhaps not. For me, the very best choice is a trip to Oxford.

The Parks is one of the nicest cricket grounds I know, it boasts an intimate little pavilion built in 1881 and is set in a very attractive park. When it's warm enough, a good number of spectators come along and picnic around the boundary and it's a very enjoyable day. When it's less warm and you're wearing every stitch of clothing you own, well at least you are watching live cricket for the first time in seven months. On those days, there are still a fair number of spectators but the chattering of teeth is an audible backdrop to the game. At the end of one such day I overheard Peter Willey say to the other umpire "That's another day we've survived." 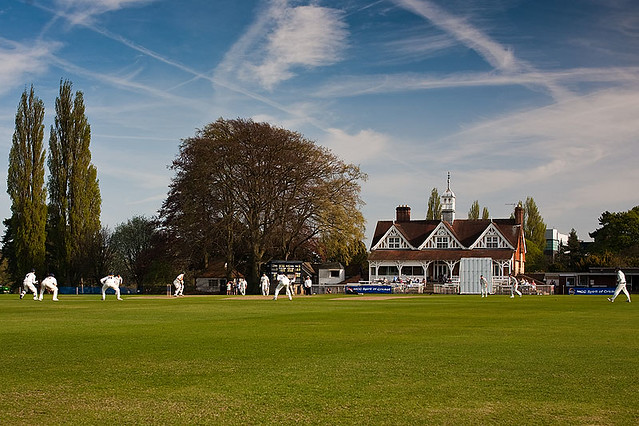 Quite often the players will sit out to watch the game and you can chat with them, if they feel in the mood. Even in a picturesque setting someone who has just got out may not be feeling particularly communicative. You also can have the chance to meet up with some of the commentators, so for instance when Glamorgan played there, I was able to say hello to Ed Bevan who I had previously met in the Media Centre at Lord's.

For most of the games I've seen, it's been the first day's play and the counties are batting. I have a feeling that visiting counties are treated in the same way as the MCC and always bat first, but I have no conclusive proof to back up that entirely unsubstantiated assertion.

In 2012, the season started on March 31st, possibly the earliest start since the end of the Napoleonic wars. It was absolutely freezing and the visitors looked every bit was cold as the spectators. I felt a little sorry for Moises Henriques, who may well have got of a flight from Australia shortly before the game. He didn't even have time to collect his county pullover before playing. 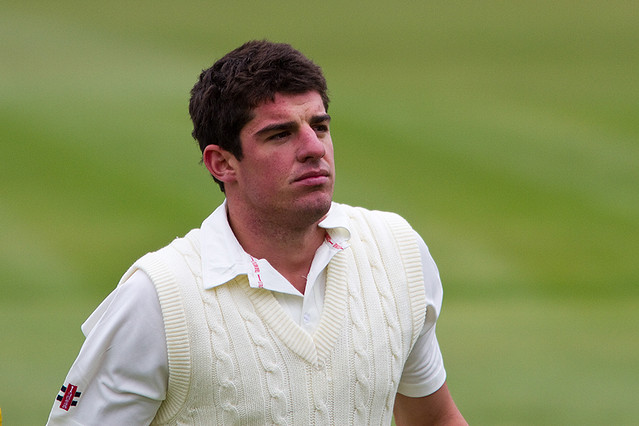 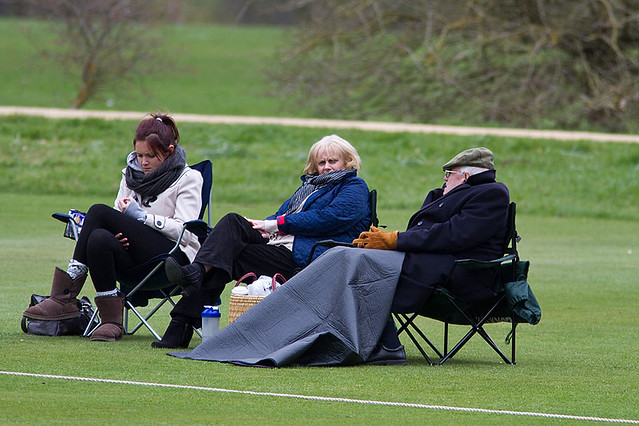 In 2011, one of the visiting counties was Lancashire, who had probably just got back from the Champion County game in Abu Dhabi, so it may well have been 20C colder than their previous game. One notable thing from the Lancashire game, was that some of the players told me that Middlesex would be going back into the County Championship first division and right enough, at the end of the 2011 season they did. 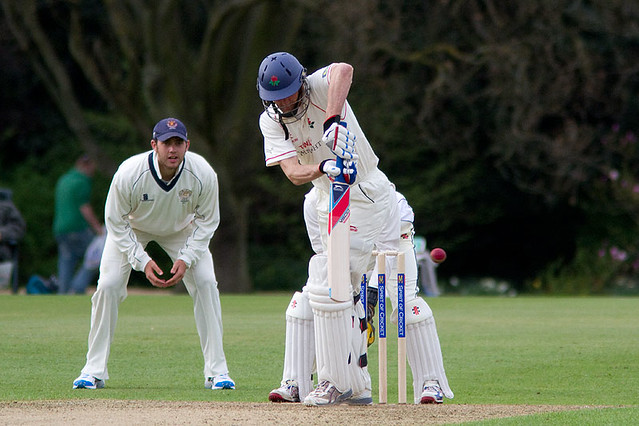 2011 also provided one of the balmiest games I've been been to at the Parks. Nottinghamshire were the visitors and it was a chance to see the likes of Samit Patel, Paul Franks, Chris Read, Darren Pattinson, and Ali Brown, all of whom had played for England, and Adam Voges who had turned out for a less successful national side. It was a pretty good day's cricket with Voges and Brown both scoring big centuries. Voges dropped a couple of 6s into the pavilion, one of which hit the roof. OK, that's not huge, but it was big enough. 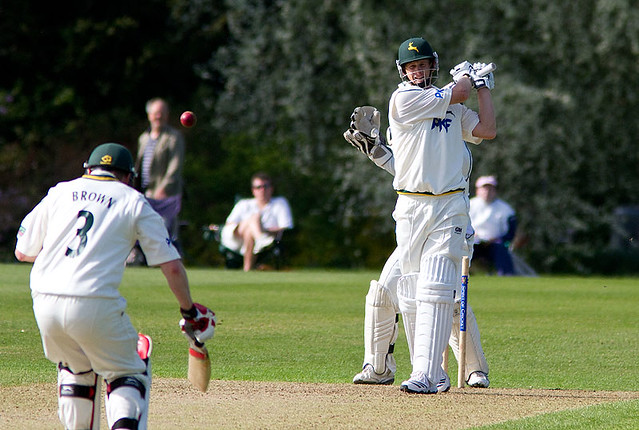 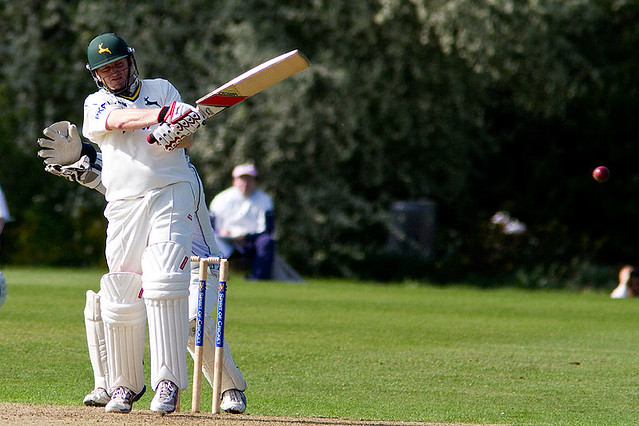 Samit Patel made a creditable, although  perhaps not particularly fluent 79. 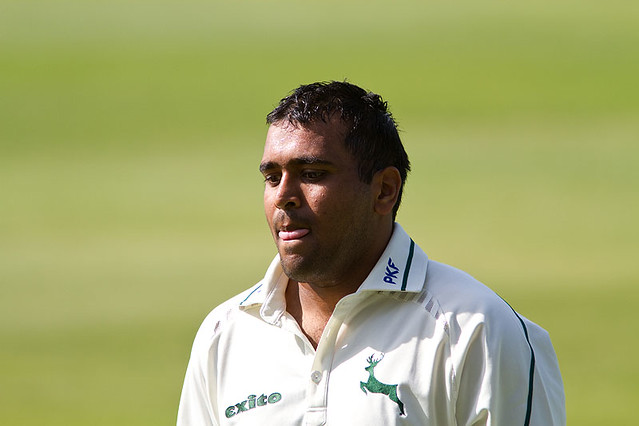 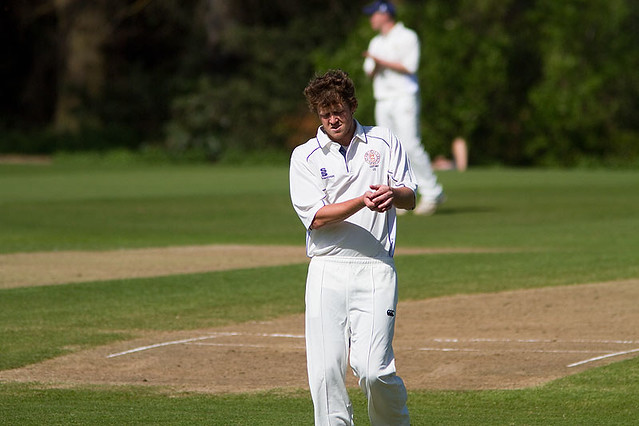 Charlie Ellison, son of Richard Ellison made his debut for Oxford in that game, Richard was watching the game with Merv Kitchen. Another Oxford bowler who is worth watching is Sam Aggarwal. He's a spin bowler who watches the ball out of his hand and therefore gives some good photographic opportunities.

There are some lovely college sports grounds at Oxford that I've played and umpired at, sadly the Parks is not one of them.